The Perks of First Person Narration

Hello there,
No story today, as we discussed last week. No, today I'm going to be talking about first person narration with regard to a couple of novels I like. If you're thinking "Forget that!" then you can come back next week, and I promise there'll probably be a story. Probably.
So, first person narration. It's a brave choice, I think, or at least a difficult one because it means that the writer is committing fully to one character and his or her voice. And while you can switch between different characters and give them all their own first person narration, if you decide to stick with one, well, that's it. You'd better hope that the reader wants to stick with that character as well. The voice has got to be one that the reader wants to listen to for the duration of the book. The first few pages need to convince them that this is a character who not only deserves to have a story told, but deserves the opportunity to tell it themselves.
I'm bringing up this whole issue for a couple of reasons. Firstly, I used first person narration for That Damned Novel. It was a decision I was encouraged to keep to by a tutor on my MA but still fretted about until I was about halfway through the novel. For a while it felt like I was real constricting myself in how I could tell the story. But once I got comfortable in the voice it just felt right, and I can't imagine the book working even on the modest level that I think it does without it.
Secondly, I just finished reading Stephen Chbosky's novel The Perks of Being a Wallflower after years of my good friend Benjamin Sheppard telling me to read it. It's very good, and I would like to talk about the narration. I'll do so as carefully as possible because you should read it if you haven't. 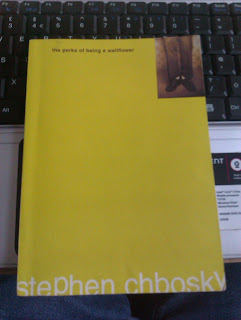 The narrator of Perks is a fifteen-year-old American kid called Charlie who's just starting high school and is writing letters to an unnamed pen-pal to sort through his problems. He's changed his and everyone else's names to keep their identities secret. He's probably best described as overly sensitive, and he's also very intelligent and perceptive. I had my worries during the first few pages. Charlie's voice takes a bit of getting used to, and I wondered if my fears of an overly-precious little novel with overly-twee affectations were going to be realised. However, because Chbosky is a very good writer, it's not long before you notice that Charlie's voice isn't an affectation of a lonely teen, it's actually how his mind works. The more you get to know Charlie, the less self-conscious the narration feels. And because we see his world through his eyes, it makes it easier for Chbosky to make us postpone our judgment of him as a character. Charlie hears people call him weird, his behaviour is erratic, he sees a psychiatrist, and he's well aware that his family and friends worry about it. But we're still interpreting him through the information he gives us.
This isn't to say it's not twee. or a little precious. It is. But I do love a bit of twee, in reasonable doses, as my Belle and Sebastian fixation makes evident, and there's a lot of heart and some uncomfortable truths in the novel that keep it grounded.
Perks reminded me both of how precarious and how effective first person narration can be. I'm someone whose teenage years almost certainly predisposed me to liking something like The Perks of Being A Wallflower, but the oh-so-heartfelt opening couple of pages had me on my sceptical guard. However, a few more pages in and I was completely involved. You don't, and shouldn't, be given a warm-up period of getting to know a character if they're narrating. You should be thrown in at the deep end and immersed in their personal view of their world until you finish the book.
This is also why I'm fairly certain that the upcoming film adaptation won't be as good. For me, the reason why the book works so well (a fleeting Hal Hartley reference aside, well played, Chbosky) is because of Charlie's voice. It's distinct, honest, and engaging. While it's certainly heartening that Chbosky is writing and directing the movie, and it's being produced by John Malkovich's Mr. Mudd company (whose fine track record includes fellow lovely outsider-teen-pop-culture-reference-fests Juno and Ghost World), there's no way that I can see to keep that perspective. Yes, Charlie is incredibly perceptive when it comes to his friends and family, but there's a difference between having him report it and actually being shown it ourselves. Now, of course there have been excellent cinematic adaptations of first-person-narrated novels, all of which will probably contradict all of my reservations. But I'm concerned that the Perks film will lose, or at least diminish, that voice, without which it may well fall into the trap of becoming an over-earnest teen romance. Having said that, Chbosky is a very good writer, and the film is well-cast (with personal favourites Melanie Lynskey, Paul Rudd, and Mae Whitman appearing), so I'm going to stop judging it before I've seen it.
So, returning to first person, it's obviously vital to have a character whose voice is distinct and arresting enough to make you want to keep reading. A really good example of a writer who uses first person well is Chuck Palahniuk. His narrators don't care if you like them or not. In Choke, my favourite novel of his, the narrator assures you that you certainly won't like him. But these disturbed individuals make for fascinating company. You don't need to like Palahniuk's weirdos, but you definitely want to hear the story they've got to tell. Incidentally, Choke was made into a film a few years ago, and had a great performance from the perfectly cast Sam Rockwell, but the biggest problem wasn't the narration, it was the fact that they changed the ending.
If you can get it right, first person narration is a wonderful tool to further immerse your reader in the world of your novel. It can make it more vivid, more personal. But it's got to be believable, not necessarily in what it's saying (there are many great examples of unreliable narrators) but in how it's saying it. It's a technique that I will definitely try again at some point, but I will do so very carefully.
So, that's it. Hope that you'll come back next week and read the story. Oh, and check out The Perks of Being A Wallflower.
Posted by Jonathan Hatfull at 16:00

Email ThisBlogThis!Share to TwitterShare to FacebookShare to Pinterest
Labels: Choke, Chuck Palahniuk, First person narration, Stephen Chbosky, The Perks of Being A Wallflower

Jonathan Hatfull
I am a writer. This blog will have some short stories as well as some occasional writing about writing.