The Classic Horror Campaign Double Feature: Carnival of Souls and The Blood on Satan's Claw 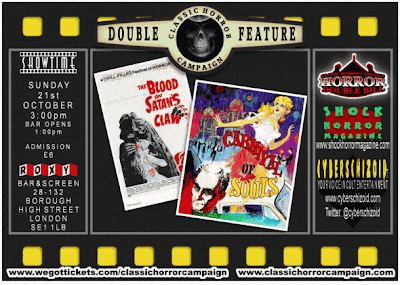 Right, a rare film-related post on the Hatfull blog, but given the time of year I thought it might be appropriate. Having been busy with London Film Festival coverage (find it all at Cinetalk!) over the past month I haven’t had a lot of time to watch as much horror as is typical for October, so I was very glad that, on a rainy Sunday afternoon, I was able to duck into the Roxy Bar and Screen for The Classic Horror Campaign’s double bill of Carnival of Souls and The Blood on Satan’s Claw hosted by Richard Gladman (@cyberschizoid) and Dr Karen Oughton (@drkarenoughton). While I had seen the latter film before, I was very excited to see Carnival of Souls for the first time. It was a film that I’d heard referred to as a classic so many times and yet I’d never got around to watching it. It was also my first time at one of the Classic Horror Campaign’s events but I will certainly return.

“You’re gonna need me in the evening, you just don’t know it yet.”

First up was Carnival of Souls, directed by Herk Harvey and released in 1962. Candace Hillgoss stars as Mary Henry, the sole survivor of a drag race gone wrong who moves to Utah to take a job as a church organist. But she hasn’t even arrived at her destination before she starts being haunted by a ghostly pale figure that appears out of nowhere in impossible places. Mary does her best to settle into her new job and her boarding house but the apparition won’t leave her be. Whether she’s alone or in the middle of a crowd, Mary can’t shake whatever it is that’s following her.

The film is designed to keep as unsure of what's happening as the lead character. The dialogue’s occasionally clunky and some of the performances are both over-eager and awkward, but somehow all this contributes to Carnival of Souls’ strange charm. Mary’s landlady (Frances Feist) seems to be participating in her conversations with her tenant via satellite. There’s some wonderful editing that pushes Mary from one place to another with unnatural speed (the man at the gas station points in the direction of the boarding house, and she’s suddenly there). Mary herself veers between composure and hysteria as she is only able to comfortably interact with other people for short periods of time. Her church-bound occupation doesn’t provide any spiritual comfort as she’s not religious. She’s a woman who’s happiest by herself for whom a job is just a job, but this self-imposed isolation makes her an easy target for the spectre and his growing army of pale zombies who leaves her with no place to hide. A modern girl with no attachments is an easy target for a haunting.

Mary realises that she needs to be with other people in order to keep her tormentor at bay, and so agrees to a date with her sleazy, booze-soaked neighbour John Linden (Sidney Berger). But despite Linden's insistent lusting even he backs away when he sees that she’s terrified of something he doesn’t understand. Interestingly, ghoul aside, Linden is the only predatory figure in Carnival of Souls. Everyone else simply wants to help Mary but she’s incapable of reaching out until it’s too late. There are some great scares that obviously had a big influence on John Carpenter (in particular, In the Mouth of Madness and Halloween) and the image of the spirits rising from the water is one that will stick with you for some time. While it is undeniably clunky at times I can’t help but feel that somehow adds to the atmosphere, and for the most part it is a highly effective piece of landmark horror. It’s a chilling, unnerving and wonderfully atmospheric experience.

“Art thou ready to give thy skin tonight?”

Carnival of Souls was followed by something rather more garish: 1971’s The Blood on Satan’s Claw. Directed by Piers Haggard, it’s the story of a small English village that falls under the influence of Satanism after well-meaning but persistently blundering farmer Ralph Gower (Barry Andrews) accidentally unearths a mysterious skeleton that looks human and yet has fur.

It’s certainly of its time but there’s a lot to enjoy in The Blood on Satan’s Claw, which is probably the best known of Tigon’s productions along with Witchfinder General. While it doesn’t boast any of the more famous horror stars of the period there’s a full-blooded turn from Patrick Wymark (Repulsion, Witchfinder General) as the sceptical judge who must return to put a stop to the evil, and Linda Hayden (Taste the Blood of Dracula) has great fun as the scheming saucy sorceress Angel Blake. After a good start in which something terrible is waiting under the floorboards for the local squire’s fiancée, the plot can’t settle on a lead character, making the whole film feel quite choppy. You’d expect the squire to be the central figure, but when he disappears he’s never really replaced. Ralph does his best but is generally ineffectual and the judge is far too venal to be heroic. The townsfolk are all too eager to murder and burn to rid the town of its evil, creating a world in which we may as well root for the dark forces as they're much more fun.

But while it’s uneven there’s an enjoyable sense of malevolence about the film as the young people of the village all either fall under Satan’s spell or knife. Mark Gatiss applauded the film in his BBC documentary A History of Horror for its unnerving whistled theme, the surprisingly sexualised attack on young Cathy Vespers, and the wonderfully nasty conceit of Satan harvesting the skin of children. When the dark lord does finally appear he's inevitably underwhelming but this remains an entertaining if uneven bit of period British horror.

The Classic Horror Campaign returns on Sunday 4th of November with a double bill of the Vincent Price House on Haunted Hill and The Legacy, starring Katharine Ross and Sam Elliott. You can find details here and you can find them on Twitter @horrorcampaign

Normal fiction service will resume tomorrow. Oh, one last thing, I discovered the other day that my review of the Soska sisters' superb horror American Mary for Cinetalk was quoted on a trade ad for the film in The Hollywood Reporter at the TIFF. I got a little bit excited as it’s my first quote, and you can see the slightly illegible proof here: 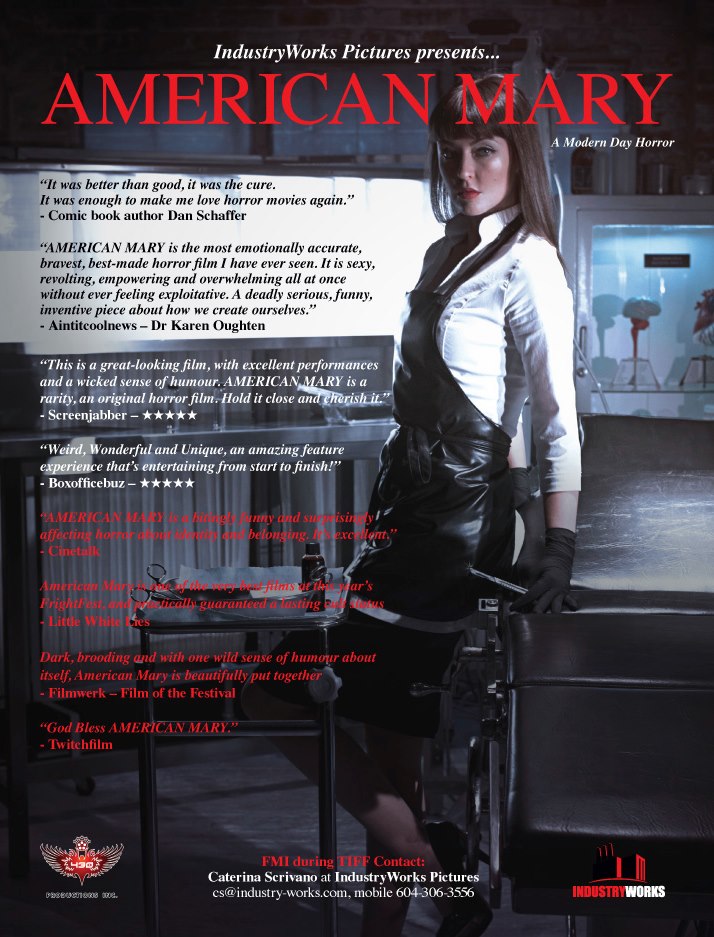 Posted by Jonathan Hatfull at 16:09

Jonathan Hatfull
I am a writer. This blog will have some short stories as well as some occasional writing about writing.